The following content describes the fishing industry as it exists today, albeit through the eyes of a land lubber.

For more definitive information on this subject, visit the Documentation part of this website.

Since before man was ever invented there were crustaceans, some living in the sea and others being steam-rollered by fascist dictators. Once man grew legs and arms, he was able to peer into the depths of the sea and witness the marvels of the marine environment. Here he saw opportunity, and quickly invented the imperial weighing scales arrangement. 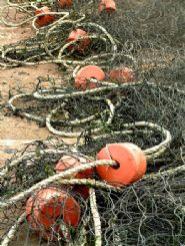 Nets and floats cast asunder upon the quayside

Lobster and crab are now caught regularly along our coastline by the metric measurement, some by creative tweezer-like tools but most by the fine art of creel fishing. Local fisherman Kevin Birse kindly offered to convey me to the midst of these time honoured fishing grounds in his modern and well-equipped craft.

Leaving the harbour at Gourdon on the ebb tide, he pointed out the area that he fished on his plasmatron charter, an electronic map that showed the land and the sea in different colours. We passed some brightly coloured plastic bottles marked ‘Tizer’ before heading south west along the coast to Three Streams Bay, also known as Haaaachtz Beuy where the guillemots play.

I was eager to be considered at the helm as the slalom flags looked quite a challenge, red flags tied to sticks that seemed to hover in the water. I was soon to be educated beyond my equivalent as we stopped the boat and looked down into the greeny-blue water. We were about to haul up a creel, a subsea snare, a maritime dupe.

Creels are laid in fleets; a string of them, sometimes 15, sometimes many more. One end is marked by a flag or maker buoy, coloured to identify the rightful owner. The creels are baited with fish before they are laid, presenting a feast that a crustacean just cannot ignore. It gets them every time.

Up came the creel; hauled to the surface by a motorised capstan; dripping with kelp and other objects that would be best not described. Inside were a huddle of small dark brown crabs with cherry red eyes and blue velvet pincers. These were the so-called Devil Crab, once feared by Norsemen and other soft pirates. These delicate creatures were believed to scare off the lobsters in days gone by, so they would be punished - unceremoniously cast out of the creel and thrown to the floor of the vessel then crushed underfoot by the bravest of deck hands. Now they are worth good money. A large picnic basket full of these velvet crabs would fetch a good £150 on today’s market, then shipped off to the Mediterranean to be scoffed in an abstract manner.

Heading further offshore, beyond the gentle calms of Haughs Bay, the tide is much stronger and the sea motions far heavier. I felt rather cold all of a sudden in the North Easterly breeze, and asked Kevin to take me back to the harbour before my own delicate frame became limp. Ploughing back through the bubbles and plastic, I enquired as to the relevance of the round floating balls at the mouth of the harbour. I though it odd to show the route back in, as I knew from Swallows and Amazons that the red lights needed to be lined up for a run towards the berth.

These buoys were markers. Down below were the baskets full of lobsters, brown crabs and velvets, all being kept alive, fresh and wet. It would hardly be efficient practice to keep the weekly catch in the bath. We hauled up some brown crabs, there must have been about 50 of them inside the basket. They looked absolutely delicious. On other buoys are stored lobsters as well, but it was getting too dark to pull up all of the baskets just for a look. 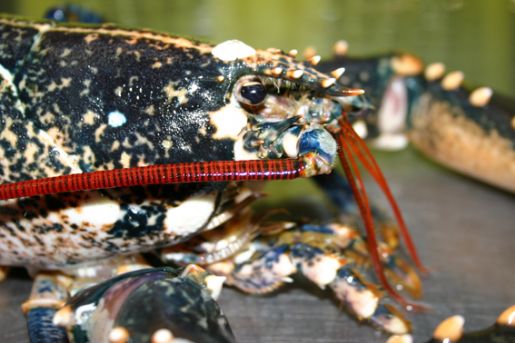 Every week, a merchant arrives to purchase these creatures and whisks them off in a refrigerated juggernaut towards the southern coasts and beyond into Europe. A similar venture exists in Johnshaven too, purveying quite startling crustaceans to far away lands or to tables in fine restaurants with proper plates and nice cutlery.

What a fascinating trip in all, and quite an eye-opener for a land lubber such as I. Much like I wave to the big green tractors out on the fields, I shall now make a point of tipping my hat to the crustacean extractors out on the seas.