For centuries people have heard the word of God at Benholm. Little is known either of the early worshippers or the Christian missionary who inspired them. The site dates to at least 1242AD.

The first church, dedicated to the Celtic saint Marnoch was replaced in the 13th century by a Gothic church, consecrated by David de Bernohm, Bishop of St Andrews.

Catholicism was the religion of the day but the Reformation brought inevitable changes, the altar replaced by a pulpit and the Sacrament House converted to other purposes. As the 19th century approached a new church was needed and, on 16th September 1832, 768 people heard the Rev James Glen dedicate Benholm Kirk as we know it today. It continued to serve the whole parish until the 1843 Disruption when many left the congregation to join the Free Church in Johnshaven. 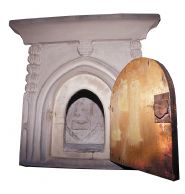 Sacrement House (or Ambry) salvaged from the former Roman Catholic Church on the site, demolished in 1832. It would have housed the host used for celebrating Mass.

By then the fishing village was the main centre of population and so in 1851 St David’s Chapel was opened for worship. By the 20th century church attendances were declining and in 1947 the Auld and Free Kirks came together as the parish of Benholm and Johnshaven, remaining an independent unit until the linkage with Bervie in 1980. In 1984 a new linkage was formed with St Cyrus and in 1998 this was changed to a union when the Rev George Hastie was inducted minister of Mearns Coastal Parish.

In 2003, the Kirk Session and Congregational Board decided it was not possible to maintain four churches and decided to close Benholm Church. 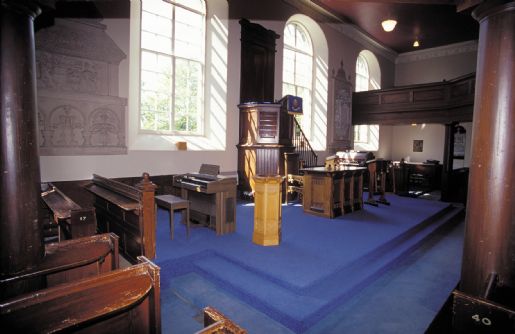 The interior of Benholm Church. Memorials: (window right) 1690, erected in memory of Robert Scott of Benholme. (left) 1621, in memory of Mary Keith, daughter of 5th Earl Marischall (founder of Marischall College in Aberdeen).