Johnshaven’s Annual Fish Festival is held in the harbour area of the village during the first two weeks of August, and attracts thousands of visitors from around the country and from across the world.

For more information on this event, email us here with your query.

Read on for info on PREVIOUS FISH FESTIVAL EVENTS 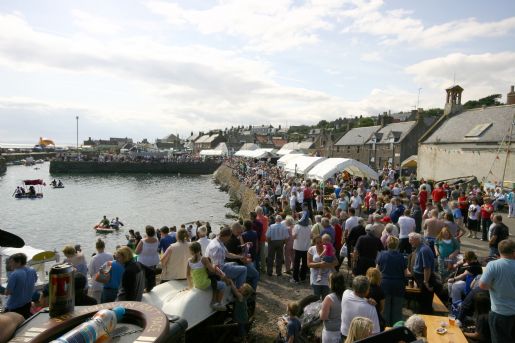 The Festival Management Group announced a total of £1600 would be made available for the Local Community Good Fund encouraging local groups and projects to apply for financial assistance to help them achieve their objectives and bring benefit to the community of Johnshaven and Benholm.

Alongside the regular and very generous sponsorships, donations and income from trade stalls, the Festival was boosted by match funding from LEADER, enabling the Group to cover the every increasing costs of putting on this event each year.

The proceeds of the event have enabled Johnshaven Fish Festival Management Group to make another donation to Montrose Lifeboat (£250) in recognition of the part they play in saving lives at sea. It is hoped that this can help towards the funds for the new Montrose Lifeboat facilities planned for the near future.

“Johnshaven Fish Festival Management Group is a gathering of people from the local community who got together in 2007 to oversee the running of the annual Fish Festival. All profit from the Fish Festival is gifted back into the community to benefit various local organisations and sports groups. The Committee are all thoroughly delighted to have secured LEADER funding for our event this year as this now means the lower our running costs are, the more funds we have to distribute to help boost the community groups.”

The event organizers are delighted to announce that this popular and hugely successful has generated a total of £1100 for the Local Community Good Fund. Local groups and projects can apply for a share of these monies to assist with a variety of needs that help them achieve their objectives and bring benefit to the community of Johnshaven and Benholm.

Sponsorships, donations and income from trade stalls provide the finance required to cover the significant running costs and be confident that the event can continue as a safe, family fun day out. Corporate sponsors Aberdeen Audi exhibited a fleet of vehicles from their exciting range on the pier whilst Silverdot Ltd offered a hospitality tent with commanding views of the raft race. Petrofac Training introduced an educational element with their fire fighting display. As part of a long term commitment to support local charity, Petrofac Training donated their sponsorship directly to Milltown Community, allowing the further development of their sustainable project.

The proceeds of the event have enabled Johnshaven Fish Festival Management Group to make a donation to Montrose Lifeboat (£250) in recognition of the part they play in saving lives at sea. The group are immensely grateful to the crews of RNLB Moonbeam and the Inshore Lifeboat for sharing their time with us and providing such an exhilarating spectacle.

“We wish to thank all of the residents of Johnshaven for their help, patience and support during the festival weekend. In particular we are grateful to the local fishing industry who worked with us and around us to ensure that their business of landing the morning’s catch continued… a working feature and integral part of the Johnshaven Fish Festival.”

The 2007 Fish Festival included music from Gerry Jablonski, Georgia Crawl, The Ship Mates and The Travelling Raspberries, with the Newtonhill Pipeband parading on each hour along the dockside.

A Celebration of the sea brought hundreds of visitors to a north-east coastal village at the weekend. Crowds packed Johnshaven, near Montrose, for the 10th annual fish festival, held on Saturday 14th August.

Visitors from across the world enjoyed trawling the variety of stalls selling fresh local produce, jewellery and crafts. There was also traditional entertainment supplied by Newtonhill Pipe Band, and more unusually, by the Banchory Morris Men. Five colourful vessels battled it out in the fancy dress raft race during the afternoon, with prizes awarded for best raft and special recognition.

The skies may have been overcast, but thousands of visitors were entertained. Fish-lovers could indulge themselves in a range of tasty treats - all part of the harvest of the North Sea.

Thanks to Steve Perks Foto Gallery.

Fine weather ensured people turned out in their thousands to enjoy this popular Mearns festival on Saturday 6th August 2005. An estimated 5,000 people visited Johnshaven for the ninth annual festival.

Since its small beginnings, the event has become a part of the local tourist calendar and a vital contributor to the village economy.

It is run by the Benholm and Johnshaven Heritage Society and most of the money is invested in a project to develop the former lifeboat house in the village harbour into a heritage interpretation point.

Alongside the customary array of fish stalls, the festival featured a food hall and barbecue. Entertainment included a fancy-dress raft race across the harbour and performances by the Craig Marroin Pipe Band. Heritage society joint secretary Maisie Murray said the number of people attending appeared to be similar to 2004’s event, when the village’s population swelled to about 5,000.

"Everything seemed to go well and the entertainment in particular was excellent," she added. "We even sold out of food in the food hall. Seeing that number of people enjoying themselves makes all the work worthwhile."

Much work has already been done on the old lifeboat house thanks to the sums raised from previous years. The building is now watertight, new skylights have been put in and the doors have been freshly painted.

The funding raised from the 2005 event will pay for electrical and plumbing work. There are also plans for the society to start using the site to display some of its artefacts later in 2006. 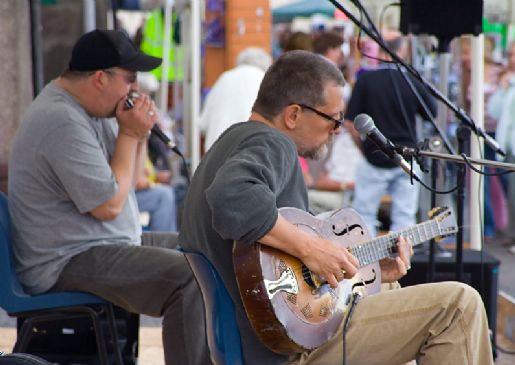 To register an interest in supporting this event next year, or for more information on the Heritage Society, please contact the following: