This historic and possibly unique match took place at Links Park, Montrose on Saturday 9 January 1926 and the Johnshaven schoolboys who kept up the good name of Kincardineshire football on that memorable occasion are pictured here. 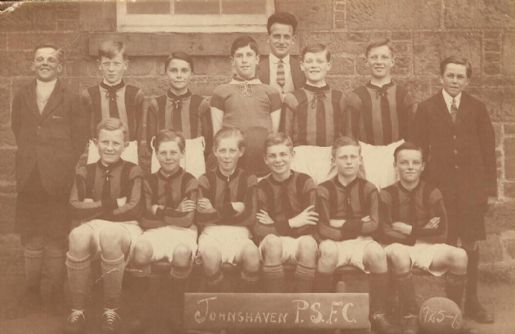 Kincardineshire’s captain, David Smith, won the toss and the much heavier Forfarshire side kicked off. The early skirmishes were confined to the midfield until Callander, the visitors’ hefty centre forward took advantage of a miss kick to give Perry no chance. Stung by this reverse the Johnshaven lads, playing good football, hammered away at a resolute visiting defence until good work by Laing and Collie McBay set up Smith and the left winger “let go a ripper” which was deflected for a corner from which he sent the ball accurately to Robbie McBAY to “drive home a beauty”. The equaliser “put the crowd in good fettle” and, although their side responded to the encouragement by pressurising the Forfar defence, no further goals came before half-time.

Forfarshire began the second half determined to take control of the game and had several chances to do so. However, the Johnshaven defence, aided by back-tracking inside forwards, held firm until the team was able to mount its own bombardment of the Forfar rearguard. A goal was bound to come and when it did it was Andrew RITCHIE who scored with a first time shot.

Then, following what a reporter at the game described as a piece of “ well nigh perfect football” Robbie McBAY “pluckily headed in” an inch-perfect cross from Smith. The already ecstatic spectators bordered the delirious shortly afterwards when David SMITH left the opposing full back for dead and, practically from the bye line, lobbed the ball, “Morton” style, into the back of the net decisively to end the contest.

After the game a veteran Montrose player said that, in his opinion, “finer football than that exhibited by the Kincardineshire forwards, especially by the centre and left wing had not been seen at Links Park for years”. However, as the reporter’s final comment on the match stressed, such an outstanding victory by one primary school team against a representative side could not have been achieved without sterling performances from all eleven boys.

A month later the same team was chosen to play Falkirk, away, in the third round of the Scottish Cup. Playing conditions in Falkirk were unfavourable and so the match was transferred to Wairds Park, neither Links Park nor Gayfield being available.

The importance of the match warranted arrangements on the grand scale. All the Junior matches were postponed, many local dignitaries were invited and a record crowd was confidently expected. It was cruel luck, therefore, that the weather on the Saturday was truly dismal, severely restricting the numbers who attended.

In the event the Johnshaven boys performed admirably but Falkirk proved just too strong on the day winning by five goals to one. Later the Anchor Hotel provided tea for the officials while the Ship Hotel treated the players bringing to an end an unforgettable period in the lives of the young Johnshaven boys who took part and their families and friends who supported them.

Question for the football aficionado.

To what does the allusion "Morton" style refer? Click and answer here.

Prize for the first out of the mailbox.